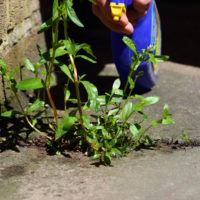 A second recent jury verdict was just handed down against Monsanto/Bayer based on allegations that one of their herbicide products contains cancer-causing chemicals. The herbicide product is commonly used by landscapers and groundskeepers. These recent verdicts may indicate that a spike in the number of workers’ compensation claims from landscapers and groundskeepers may be on the horizon based on exposure to the harmful chemicals. Read on for more about the recent lawsuit and the dangers of the herbicide, and contact a dedicated Southern California workers’ compensation attorney if you need help with a workers’ compensation claim on behalf of yourself or a deceased family member.

For the second time in eight months, a jury concluded that Monsanto’s popular weed killer brand Roundup was a “substantial factor” in causing a consumer’s cancer. The San Francisco jury determined that the plaintiff’s use of Roundup caused him to contract non-Hodgkin lymphoma.

The Sonoma County man was diagnosed in February 2015. He had been using Roundup on his 56-acre property for more than 20 years, according to the lawsuit. He claimed that Roundup’s key ingredient, a chemical known as glyphosate, is carcinogenic. The jury was persuaded by the causal evidence and awarded the plaintiff $80 million in damages.

The lawsuits based on glyphosate were initiated after the World Health Organization (WHO) issued a report in 2015 concluding that glyphosate is “probably carcinogenic to humans.” Bayer, the parent company to Monsanto, issued a statement claiming that its product is safe and that it intends to appeal the verdict. Bayer has argued that the WHO report is outnumbered by the studies that have concluded glyphosate is safe, and that U.S. regulators have yet to ban the chemical. Roundup is still sold in stores around the country as a commercial weed spray. Critics have argued that Monsanto has exerted undue influence over regulators.

Last August, another jury found that Roundup had caused cancer in a former groundskeeper and that Monsanto had deliberately failed to warn consumers and regulators about the product’s dangers. The recent decision is the first in federal court, which opens the door to thousands of federal lawsuits around the country. Hundreds are already pending in San Francisco.

By Invictus Law | Posted on April 22, 2019
Workers' Compensation
Certified Specialist
What Others Say See what our clients have to say about working with Invictus Law.