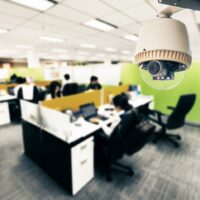 If you were injured on the job in California, you are generally entitled to coverage from your employer’s workers’ compensation insurance. Employers or insurance companies may try to avoid paying out on workers’ compensation claims by either claiming that an injury occurred outside of the workplace, that the employee is disqualified for coverage for some reason (for example, if they were intoxicated at the time of the accident), or that the employee is exaggerating the severity of the injury. Employers may try to use video surveillance obtained at the workplace or outside to disprove a workers’ compensation claim. In turn, our clients often ask if they should seek surveillance footage to boost their claims.

Video surveillance may be available from a few different sources, and the value of each source is different. Surveillance that may arise in a workers’ comp case could include:

● Security camera footage at the workplace. Many workplaces have closed-circuit video surveillance to deter theft or ensure safety. These cameras may record a workplace accident.
● Phone cameras. Employees, supervisors, coworkers, and even customers may have recorded a workplace accident or the aftermath.
● Private investigator cameras. Employers or insurance companies might hire private investigators to follow an injured worker to see if they are lying about the extent of their injuries. For example, they may try to catch an injured worker playing a sport or generally being more agile and mobile than they claimed.

Surveillance footage can be extremely useful in proving your claim. If security camera footage at the workplace captured your accident, you could use it to definitively prove that your injury occurred at work. The same can be said for cell phone footage, although it may be harder to verify the time and place a recording took place.

Cameras can also be used to show unsafe or poor working conditions that contributed to an injury, if they remain ongoing at a workplace. The timestamp available on video camera footage also puts an exact time and place on your accident, which is useful evidence to avoid a claim denial based on failing to report a claim in a timely manner.

Video surveillance could also be used against you. Private investigators can use footage of an injured worker performing daily activities in public to show that they are not as seriously injured or disabled as they claimed, or to show that an injured worker is not using a prescribed medical device such as a cane or neck brace. This could limit your total claim or lead to a rejection of your coverage.

Video surveillance at work may also show that the injured worker was intoxicated or deliberately caused an accident, which could cause their claim to be denied. The insurance company can use video surveillance with impunity, and courts may admit most types of footage in court so long as it is authenticated.

By Invictus Law | Posted on March 31, 2020
Workers' Compensation
Certified Specialist
What Others Say See what our clients have to say about working with Invictus Law.