What Are OSHA’s Fatal Four? 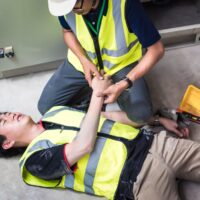 The Occupational Safety and Health Administration (OSHA) compiles statistics on workplace injuries and fatal accidents, including the most common types of accidents. OSHA identified the top four construction hazards that lead to workplace fatalities each year, which OSHA historically dubbed the “Fatal Four.” The Fatal Four account for more than 60 percent of all construction fatalities annually. Continue reading to learn about the top causes of construction fatalities and OSHA’s recommended prevention measures.

To prevent falls and limit the danger, OSHA has several recommendations including:

Rolling, falling, swinging, or flying objects injure thousands of construction workers every year. Loose equipment, building materials, machine parts, and other objects can quickly become dangerous and deadly when dropped from a height. Struck-bys also include being hit by heavy machinery such as cranes.

To avoid struck-by accidents, OSHA recommends workers never position themselves between moving and fixed objects and always wear high-visibility clothes near equipment and vehicles. Workers should always wear appropriate personal protective equipment (PPE) such as helmets and goggles, and all workers who operate machinery should be appropriately trained. Only qualified, trained individuals should operate hazardous machinery.

Among other safety measures, OSHA specifically recommends that workers never enter unprotected trenches or excavations five feet or deeper without an adequate protective system in place. Even trenches under five feet may benefit from such a system. OSHA also recommends that trenches or excavations are properly protected either by shoring, sloping, benching, or trench shielding. Workers are also advised to avoid being positioned between a moving and a fixed object.

Electrocution accidents round out OSHA’s Fatal Four. Electrocution can happen via exposure to loose wires or other electrical sources, or through contact with a metal object (such as a ladder) that touches a source of electricity. Electrocution can lead to severe burns, internal organ damage, and fatal injury.

OSHA recommends workers identify all utilities on or near work sites before starting work. Look out for overhead power lines whenever operating equipment, and keep a safe distance from those power lines. Electrical tools must be grounded or double-insulated. Workers on scaffolding, ladders or other metal surfaces should be mindful of any sources of electricity.
OSHA also recommends using ground-fault circuit interrupters.

If you’ve been seriously hurt at work, you need tried and true legal help to maximize your compensation. The seasoned California workers’ comp legal team at Invictus Law is ready to help. We’re board-certified specialists in workers’ compensation. You don’t have to pay unless we recover on your behalf. Call us today for a consultation.

By Invictus Law | Posted on May 2, 2022
Workers' Compensation
Certified Specialist
What Others Say See what our clients have to say about working with Invictus Law.